Beirut and The Hazards of Storing Ammonium Nitrate

You would have to be void of emotion and compassion to have not been shocked and saddened at what happened in Beirut, Lebanon on the 4 th August 2020.That afternoon, two explosions occurred at the port of Beirut city where a large quantity of ammonium nitrate was being stored.

This caused at least 177 deaths, 6,000 injuries, US$10–15 billion in property damage and left an estimated 300,000 people homeless. This avoidable tragedy raises numerous questions: what can I do to help? Has this happened before and could it happen here in Australia? Well as you can see from the diagram below care of Visual Capitalist, ammonium nitrate explosions are surprisingly common in a global context, happening a little over every two years on average, with 9 such explosions this century. 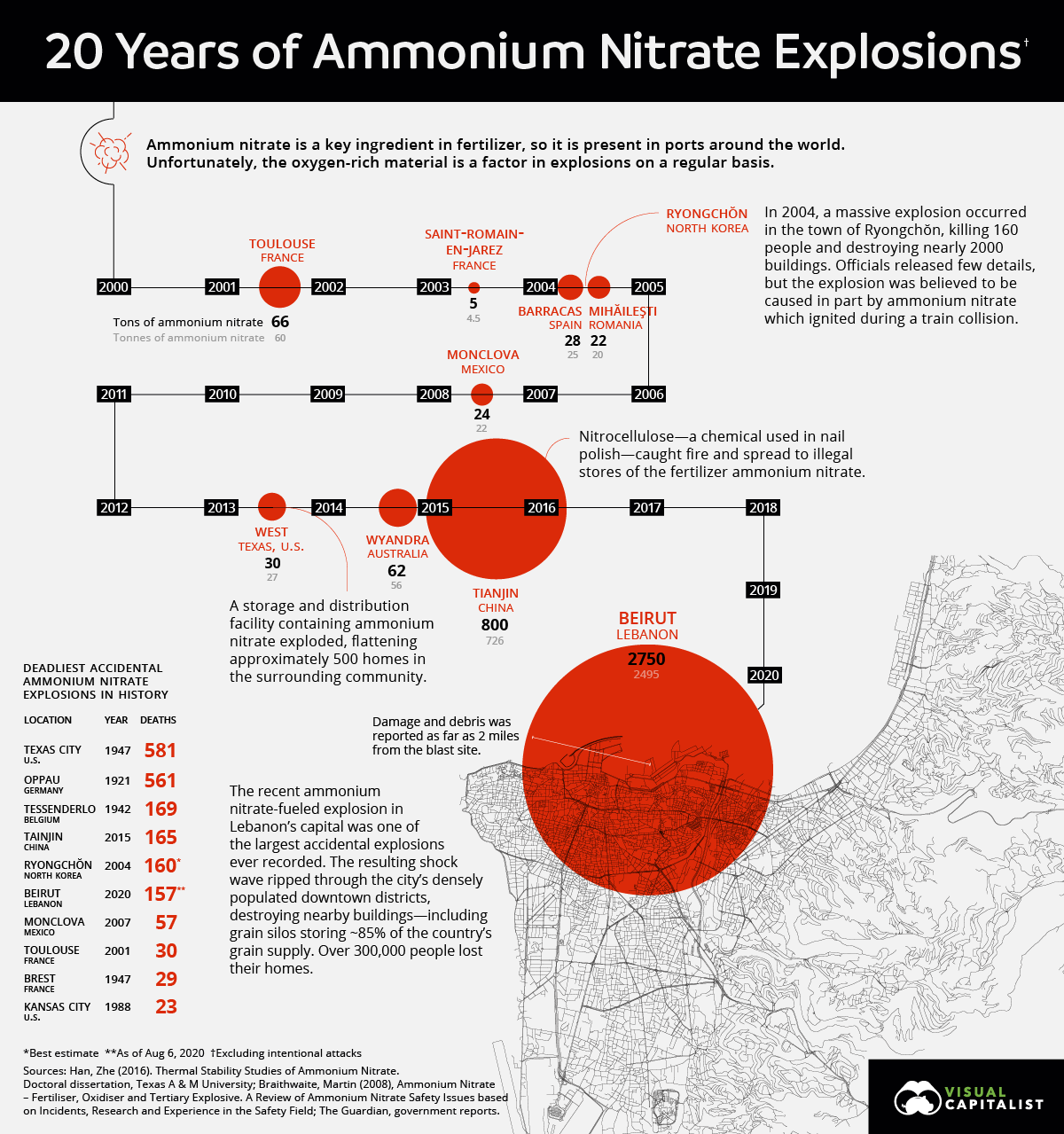 So: what is the amount of nitrate and what is it used for?

Ammonium Nitrate (NH 4 NO 3 ) is a white crystalline or granular material which is obviously rich in nitrogen, odourless and soluble in water.

What are the hazards?

The following can cause NH 4 NO 3 to become less stable and at greater risk of explosion:

Ammonium nitrate can be classified as both a:

SSAN’s are ammonium nitrate, its emulsions and mixtures containing greater than 45% NH 4 NO 3 but exclude solutions and NH 4 NO 3 products classified as class 1 explosives.
On 25 June 2004 the Council of Australian Governments (COAG) agreed to a national licensing system to limit access to SSAN. Each state and territory have introduced legislation and/or regulations to give effect to the COAG agreement.
In essence, you have to be licensed if you store more than 3 kgs of the stuff, an exemption basically for laboratories that use very small quantities. You can’t export, import or sell the stuff under the conditions of the license and there are strict requirements for storage relating to segregation from other Dangerous Goods to staff clearances, the type and dimensions of the facility, even down to its locks and security fences, fire protections and separations from vulnerable facilities , record keeping, inspection and so on.
Ammonium nitrate fertiliser use in Australia and alternatives

It’s hard to get specific, up to date data on the use of ammonium nitrate fertilisers in Australia but it is on the decline due to the licensing requirements for concentrations over 45%, which also includes Calcium ammonium nitrate formulations over 45 % NH 4 NO 3 , and though not a Dangerous Good, are still classified as an SSAN. In fact, Tasmania banned the use of SSAN fertilisers back in 2005, due to the risks of storage and unauthorised access one would presume. If you look up ABS statistics on fertiliser use in 2016/17 (1) you will see Urea was the most widely applied fertiliser at 1,387,000 tonnes and the ammonium phosphates most widely used (over 13 million hectares) at 963,000 tonnes.
Managing the Hazards of Ammonium Nitrate using the Hierarchy of Controls (non exhaustible example only):

1. Elimination of the Hazard or process:

Eliminate the use of nitrogen rich fertilisers that are strong oxidising agents which can explode under extreme conditions of heat and pressure in a confined space.

Only store in approved facilities on its own, fully segregated from other Dangerous Goods such as explosives, flammables gases and liquids, organic peroxides , corrosives etc as well as combustible liquids like diesel( See NH 4 NO 3 products SDS for entire listing) See table 1 below for a comparison of the ADG code labels with the hazard pictograms from the Globally Harmonised System (GHS) of classification criteria.

Follow label and SDS prescribed personal protection equipment when handling the product which normally involves, a dust mask, goggles, protective clothing (long sleeve shirt and trousers), PVC gloves and work boots in tandem with the workplace risk assessment.
So, in summary we do live in the lucky country! We are well governed, we enjoy our civil liberties, rights and freedoms and for most of us recognise that regulation carries with it some cost but is essential to the proper functioning of our economy and the safety of our people. The precautionary principle that our governing bodies follow asserts that when there are threats of serious damage, scientific uncertainty must be resolved in favour of prevention. The tragedy in Beirut reminds us of this and the importance of process and procedural safety regarding dangerous goods such as Ammonium nitrate involving how and where its stored, with what and for how long. By applying the hierarchy of controls even at the basic level as per the example shown, we can mitigate the consequences significantly to low levels of risk in our workplaces. Get it wrong and neglect product stewardship at a major hazard facility, and governments can fall and lives could be lost.
Table 1 ADG code labes with the hazard pictograms from the Globally Harmonised System (GHS) of classification criteria. 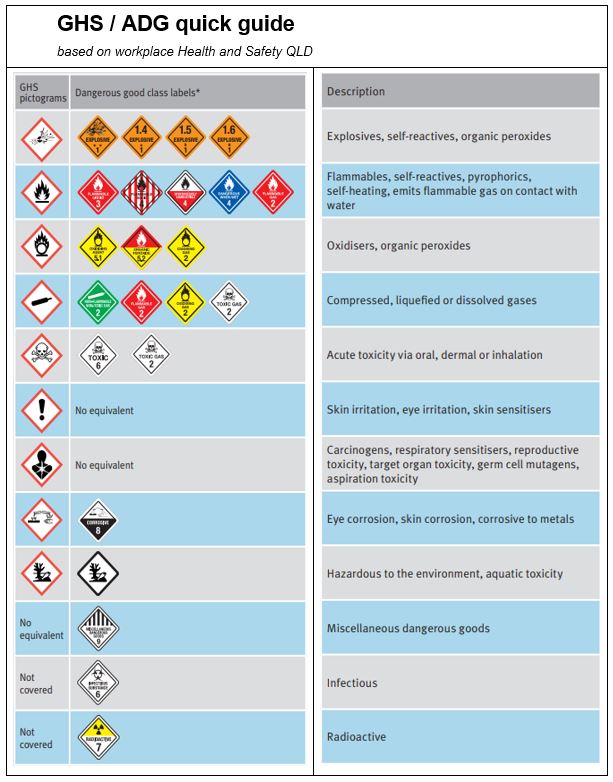