Australia has over 874,000 km of roads which translates to 1.75 million km of roadsides with vegetation that must be managed. Roadsides can be a harbour for important weeds and a potential avenue for their spread.

Weeds on roadsides are divided into legally controllable or ‘declared’ weeds and ‘other’ weeds.
‘Other’ weeds have no legal requirement for control and are generally seen as a low priority for roadside vegetation managers.
Agricultural weeds on roadsides are low priority and are only targeted for road user safety (line-of-sight) or if on a locally important weed list developed by a local natural resource management group or council.
While each state has a slightly different approach to managing roadside vegetation, major roads are the responsibility of the state roads department and minor roads are the responsibility of local government.

Managing roadside vegetation can be complex due to:

a priority of road-user safety
the need to maintain road structure
fire management
control of declared weeds
protection of rare and endangered vegetation
Roadside vegetation management is complex because they are managed by a range of organisations which often use contractors and have limited budgets.

Public safety is the primary driver for roadside vegetation management. An extended line of sight, unimpeded vision of guideposts, signs, railings and the ability for a vehicle to get off the ‘road’ without any damage to people and/or vehicles are important goals.

The maintenance of infrastructure is also an important driver of roadside vegetation management. It is essential that water freely flows from the sealed surface and off the road shoulder. Ponding of water near the edge of the seal caused by weed growth allows water to enter the road base, which in turn destabilises the underlying road structure. Corrosion and potential fire damage to roadside posts and signs can be reduced by keeping them free of plant growth.

Fire management can play a significant role in how roadside vegetation is managed. Roadsides are a point of ignition, provide containment and firebreak, and are a route of escape in the event of an evacuation. In New South Wales and Western Australia roads can be used as fire breaks, so the road corridor tends to be wider than in other states. For example, in Western Australia major roads will have a 4 to 10 m vegetation management buffer from the edge of the bitumen.

Another increasing complication is that many of the weeds have developed resistance to, or were never controlled (tolerant) by, commonly used herbicides such as glyphosate.

Control of weeds on roadsides

Weeds on roadsides are divided into legally controllable or ‘declared’ weeds and ‘other’ weeds. ‘Other’ weeds have no legal requirement for control and are generally seen as a low priority for roadside vegetation managers. Agricultural weeds on roadsides fit into the ‘other’ category and are low priority. They are only targeted for road user safety (line-of-sight) or if on a locally important weed list developed by a local natural resource management group or council.

The control of declared weeds along roadsides is the third major driver for roadside vegetation management after safety and infrastructure maintenance. Each state has slightly different systems of declaring specific weeds that must be controlled, prevented from spreading, or not introduced.

For example, New South Wales has the Biosecurity Act 2015 from which 11 strategic weed management plans have been developed. These guide how ‘road managers’ conduct management of declared weeds on roadsides.

The “Red Guidepost” program in NSW aims to increase awareness of declared weeds on roadsides by both the public and road managers. Red posts are located at the beginning and end of a declared weed infestation.

Conservation of rare and endangered vegetation or habitats

Areas of vegetation between the roadside and freehold land often contain rare habitats or rare and endangered plant species, which rely on these areas for their survival. In many areas, due to significant clearing, roadside verges are the last relatively untouched stands of native vegetation. These areas can be signposted and have specific protocols in place to minimise disturbance and further loss. This remnant vegetation along roadsides also provides connectivity between larger patches of native vegetation, particularly in areas that have been heavily cleared for cropping or grazing.

Use of herbicides on roadsides

The range of herbicides available for use on roadsides is becoming restricted due to potential off-target damage, occupational health and safety and minimising complaints from the public. Many roadside managers decide to only use glyphosate because it is cheap, effective and simplifies operations.

Some road management authorities have approved herbicide lists which include the products they deem as suitable for their area of management responsibility.

Another complexity of roadside weed management is that the timing of herbicide application is often determined by logistical factors and not the condition and stage of the vegetation that needs managing. Roadsides are often sprayed when plants are stressed from low soil moisture levels and extreme temperatures. Plants are often quite mature when they are sprayed, which in turn leads to insufficient herbicide coverage to get effective control.

Compounding the issue of issue large and stressed weeds is ensuring sufficient coverage for the type of herbicide being used. Keeping ground speeds around 16 kph and ensuring application volume is high enough to give at least the minimum per cent area coverage in Table 1. Always calibrate the sprayer and measure coverage with water sensitive paper before heading out on a job. 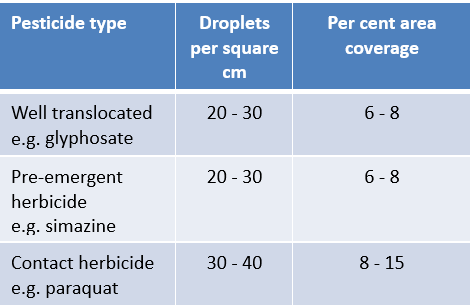 Major roads such as freeways and highways are treated on a scheduled basis, such as every few months, while lower priority roads that are managed by local government will vary with the rate of growth and how management contracts are negotiated. Roadsides in higher rainfall areas will be treated more often than those in lower rainfall areas. Roads shoulders in southern Australia with a predominantly winter rainfall will be sprayed in spring with a follow-up application depending on rainfall and effectiveness of the initial application.

Some road management authorities will slash roadsides and only use herbicides around roadside furniture. Other authorities will use mostly herbicides because it is cost-effective as large areas can be treated quickly compared with slashing and grading and have lower risk of spreading weeds.

Adding to the issues of spraying large and stressed weeds, the trend in roadside weed management to rely on glyphosate as the only herbicide used has led to the development of weed populations that are either resistant or tolerant to glyphosate.

Who is responsible for managing roadsides?

Major roads such as highways and major arterials are managed by each relevant state government department.

District and local roads are managed by local government. Local government organisations can be contracted to the State main roads departments to conduct roadside maintenance, including weed control, slashing and road surface maintenance.

Over the past 20 years there has been an increasing trend at both a state and local government level to contract maintenance work to other organisations.

Each state and territory manage roadsides slightly differently. This is usually linked to State and local government laws and regulations.

The width of the road reserve varies greatly within each state depending on how closely the area is settled, and presence of crown land and travelling stock routes.

Can private landholders and groups manage weeds on the adjacent road reserve?

In most states weed management on roadsides by individual landholders is discouraged.

The issue of public liability if there is an accident with a road user is the greatest deterrent.
Secondly, many road reserves are also important remnant habitats for native plants and animals. Damage to native vegetation could be considered as ‘clearing’ under state vegetation legislation.

In South Australia landowners or community groups can do work such as weed control on roadsides only with the permission of their local council. If they are controlling declared weeds, it is recommended that they also notify their Landscape Board to get advice. 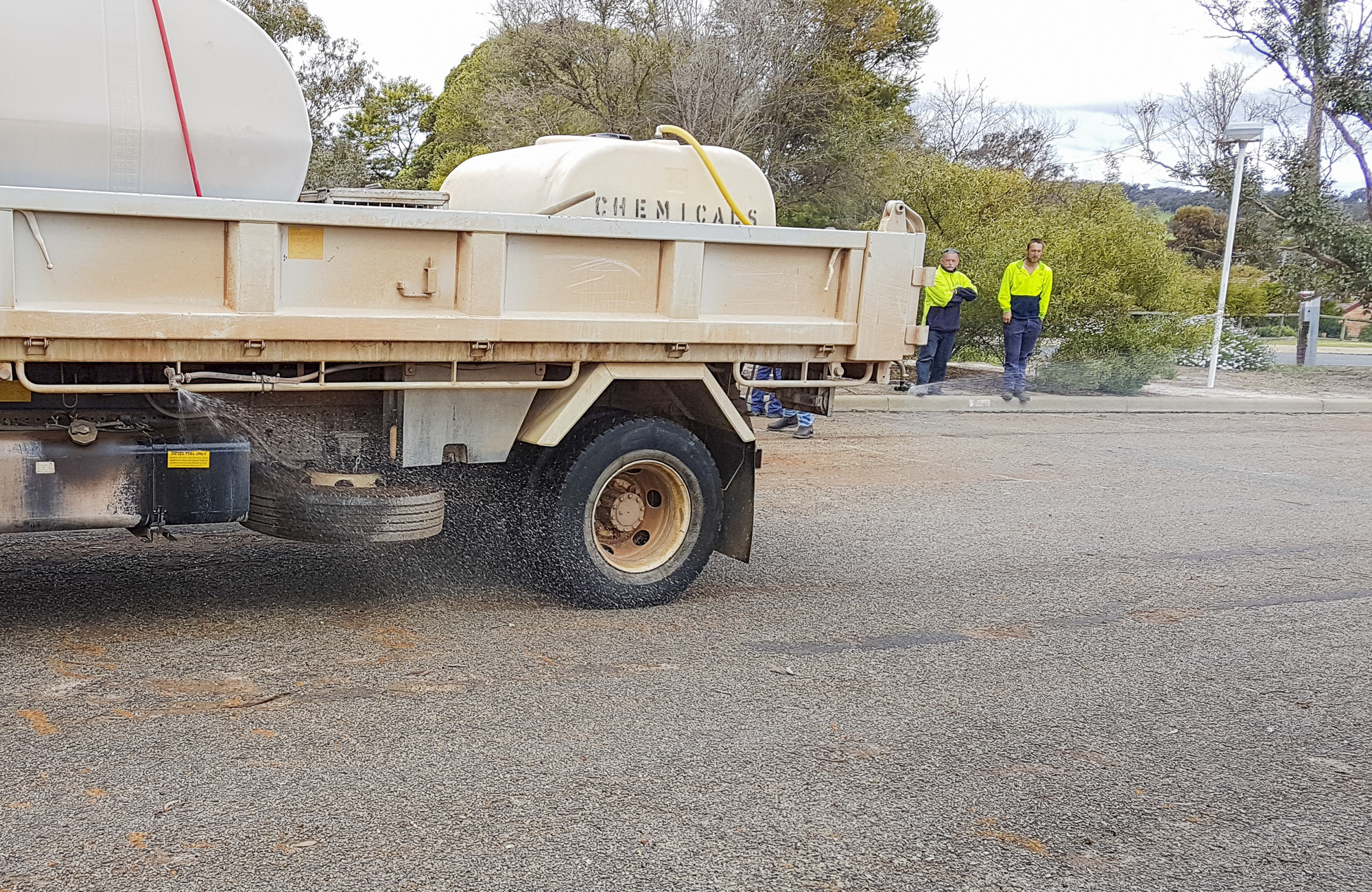 It is always important to check the level of coverage achieved before heading out on a job. Here we see a spray truck using boomless jets being checked in a car park using water sensitive paper. Image: AGRONOMO